My introduction to Bierzo, a relatively new (est. 1989) appellation in northwestern Spain, came through its white wines, made primarily from the Godello and Doña Blanca grapes. But Bierzo’s reds are easier to find in the U.S. and well worth seeking out.

Bierzo reds, like the wines of Ribera Sacra, are based on the Mencía grape—although Bierzo’s wines tend to be fuller and juicier than those of its neighboring DO to the west.

Although Mencía is an ancient grape said to have been brought to Spain from France in the Middle Ages, its vines were decimated in the phylloxera plague of the 1800s. The chance to revive Mencía vineyards along with the challenges of cultivating Bierzo’s steep, rocky terrain—and, no doubt, the lower cost of land here—seem to be attracting talented, ambitious winemakers. 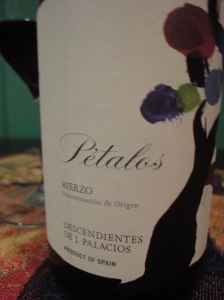 A leading house of Bierzo, established in 1999, is Descendientes de José Palacios, producer of an affordable star of the region, Pétalos del Bierzo. (BTW, José was the patriarch of Rioja’s Palacios Remondo winery. His “descendents,” both of whom trained in Bordeaux, are son Alvaro, a top winemaker in Spain’s Priorat appellation—L’Ermita is his signature wine, and grandson Ricardo Pérez.)

Descendientes de J. Palacios’ vineyards are in the town of Corullón, on the western edge of Bierzo, where they cultivate their vines biodynamically. They produce small quantities of several single-vineyard reds priced from approximately $55 to $175.

“I love this wine!” I said aloud as I drank the 2011. It was soft and beautiful but complex on the palate, with notes of dark fruit and flowers.